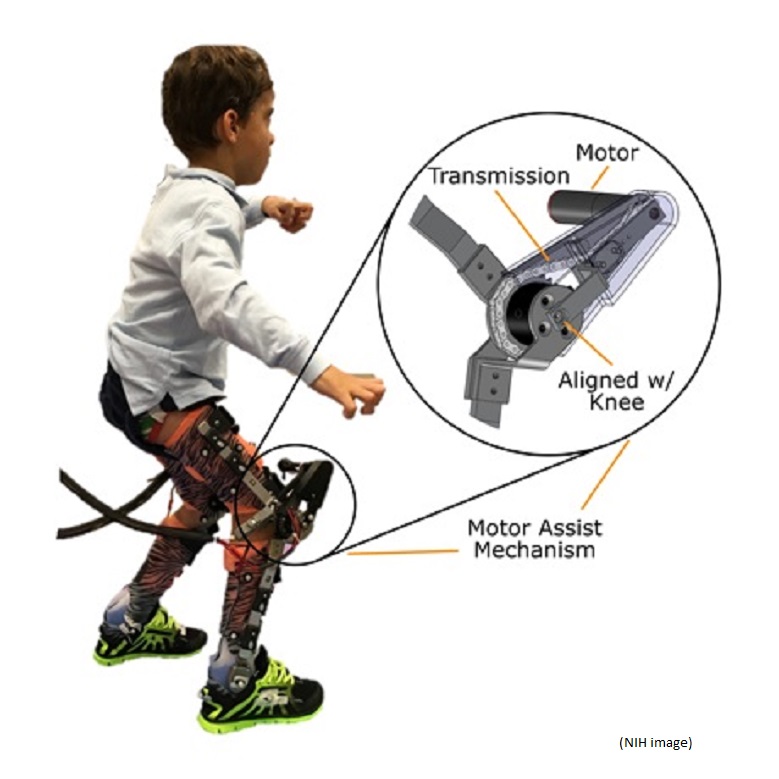 Researchers from the Center’s Rehabilitation Medicine Department created the robotic exoskeleton, the first of its kind, specifically designed to treat crouch gait in children with cerebral palsy by providing powered knee extension assistance at key points during the walking cycle.

What Is Crouch Gait and How Is It Commonly Treated?

Crouch gait is the excessive bending of the knees while walking. It is a common and debilitating condition in children with cerebral palsy. Even when treated with conventional methods, it can lead to progressive degeneration of the walking function. In fact, according to the NIH, around half of adults with the disorder ultimately lose their ability to walk altogether.

What Did the Test Results Show?

The NIH study followed seven individuals between the ages of 5 and 19 who were diagnosed with crouch gait from cerebral palsy and had Gross Motor Function Classification System levels I-II, meaning each could walk at least 30 feet without use of a walking aid.

The study showed that walking with the exoskeleton was well-tolerated and six of the seven participants were able to walk independently without mobility aids or therapist assistance in the very first practice session. Improvements in knee extension were also observed in six participants with gains (8-37°) similar to or greater than the average improvements reported from invasive surgical interventions. Importantly, according to the researchers, the gains in knee extension occurred without a reduction in knee extensor muscle activity, indicating that these participants worked with the exoskeleton rather than offloading the task of straightening the leg during walking to the robot.

What Do the Researchers Say?

Researchers said the study suggests that powered knee exoskeletons should be investigated as an alternative to or in conjunction with conventional treatments. They indicated that the evidence from the study supports both further research, as well as device development.

“Most wearable exoskeletons have been designed for adults with paralysis, with the exoskeleton replacing the lost function of the user’s. We sought to create a device that could safely and effectively improve the posture of children with crouch gait while they walked,” said Thomas Bulea, Ph.D., the principal investigator of the study and staff scientist in the NIH Clinical Center Department of Rehabilitation Medicine.

“The improvements in their walking, along with their preserved muscle activity, make us optimistic that our approach could train a new walking pattern in these children if deployed over an extended time. This study paves the way for the exoskeleton’s use outside the clinic setting, greatly increasing the amount and intensity of gait training, which we believe is key to successful long-term outcomes in this population.”

The NIH is the primary federal agency in the U.S. that conducts and supports medical research. It includes 27 Institutes and Centers and is a component of the U.S. Department of Health and Human Services.

At NAPA Center, we take an individualized approach to therapy because we understand that each child is unique with very specific needs. We embrace these differences with an understanding that individualized programs work better. For this reason, no two intensives are alike. We work closely with families to create a customized intensive program specific to the child’s needs and family’s goals. Let your child’s journey begin today by contacting us to learn more. 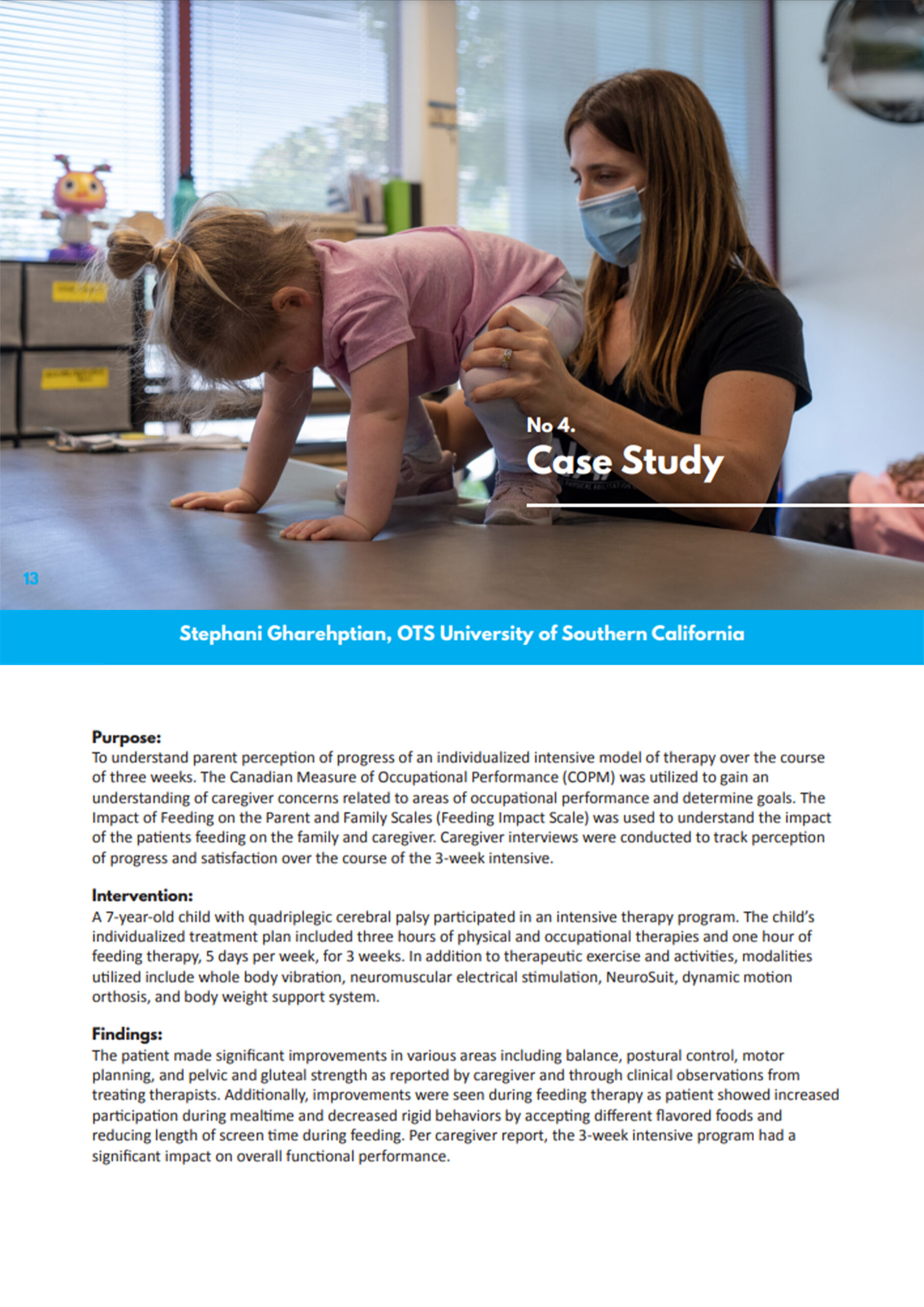 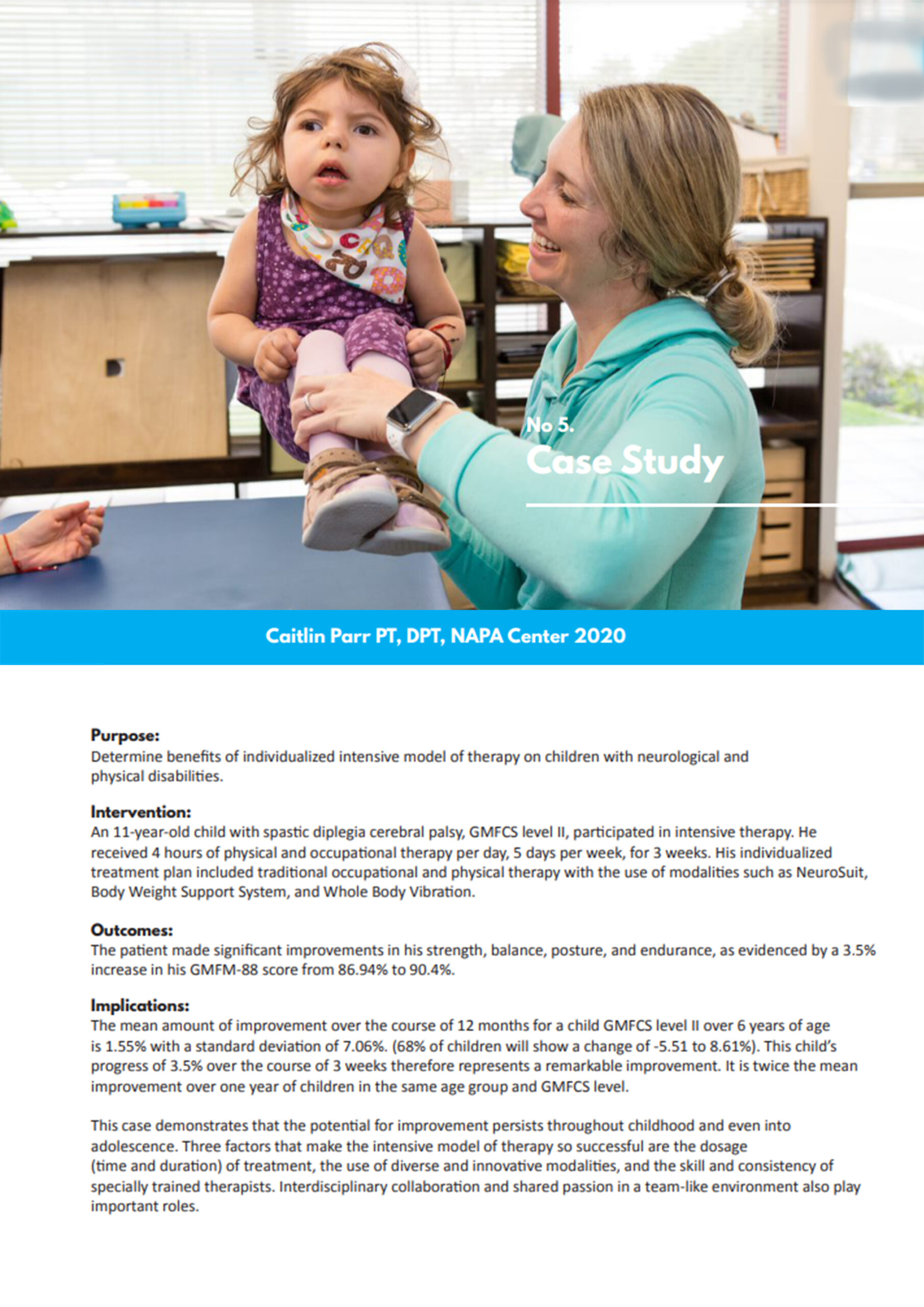 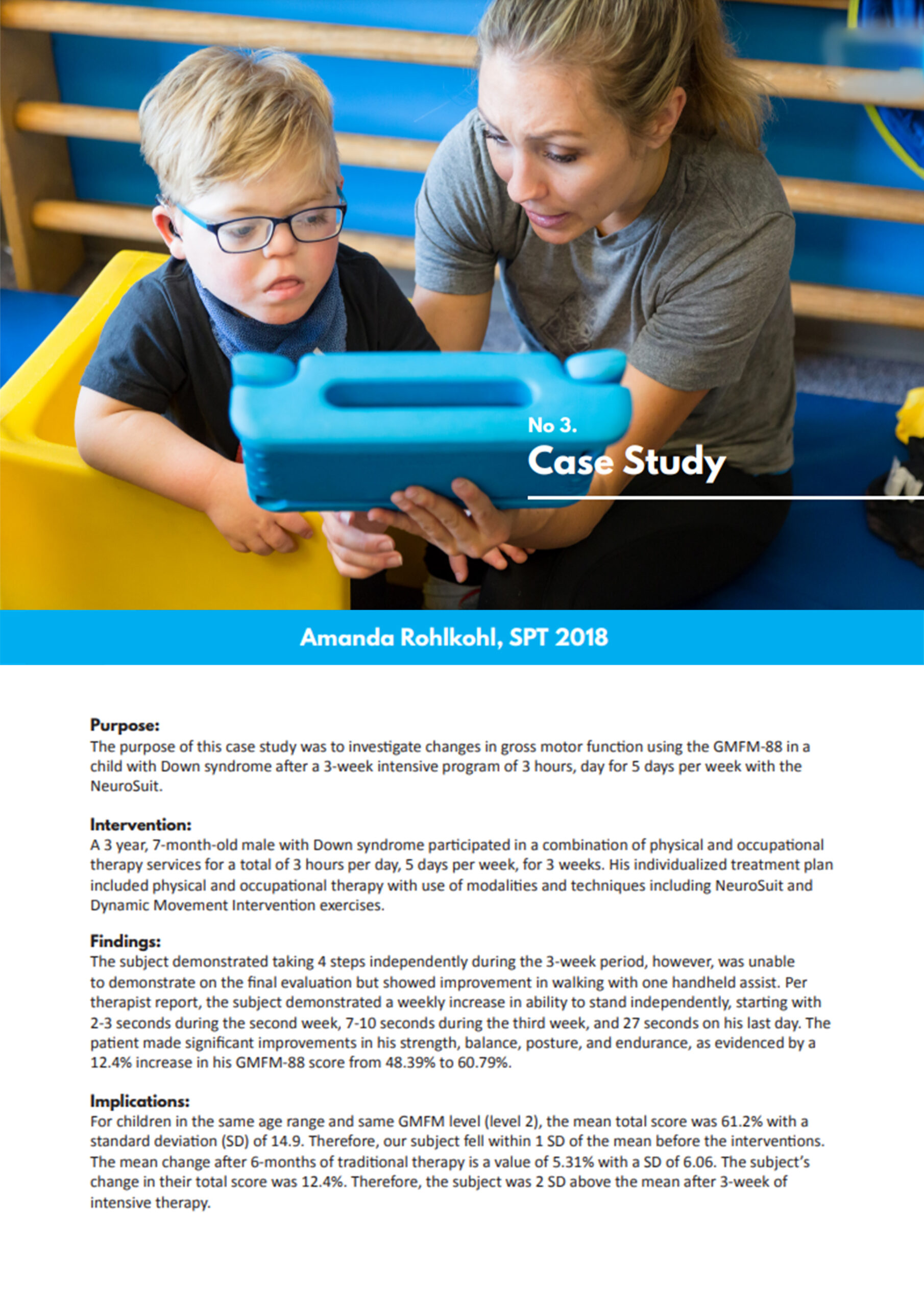 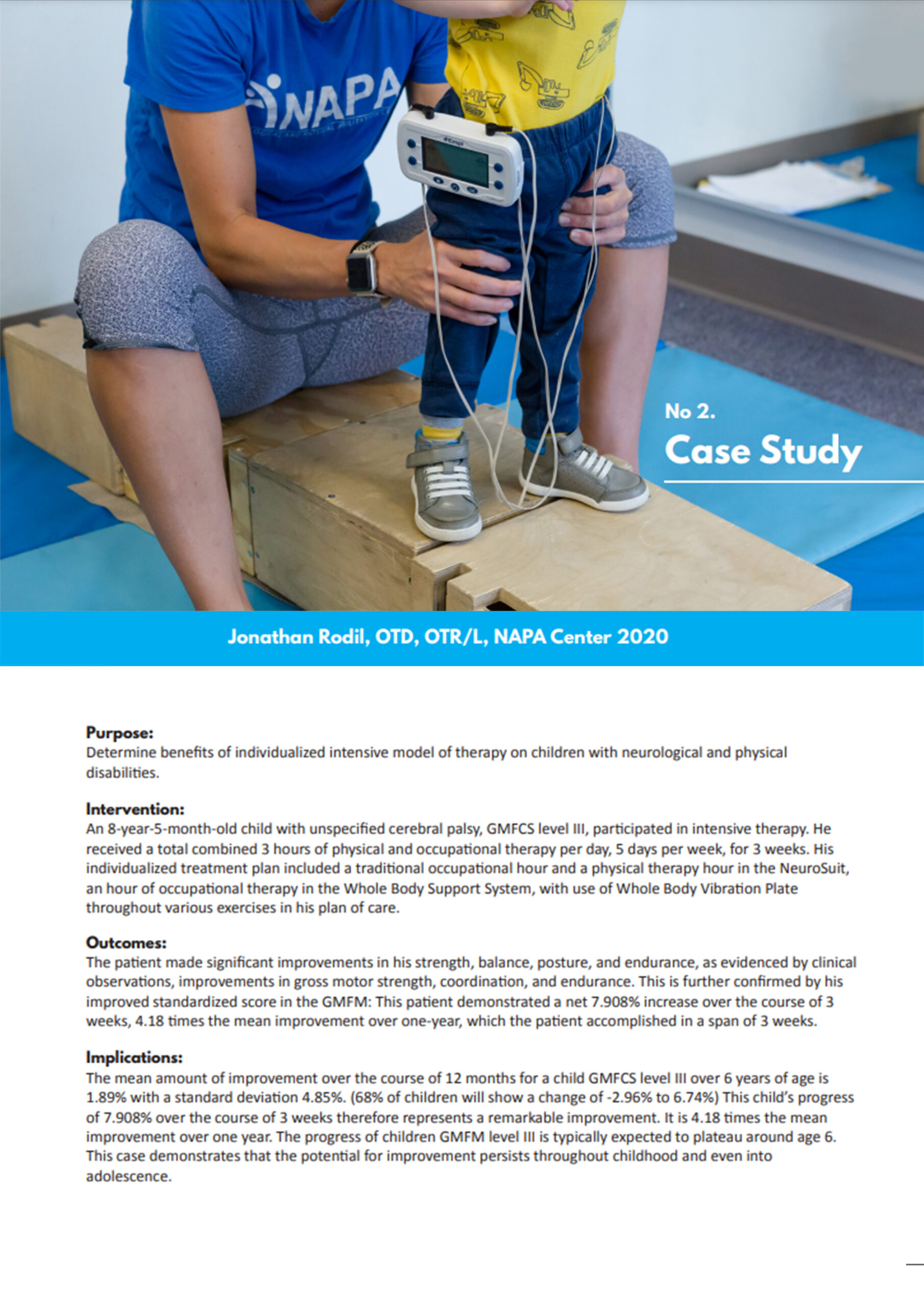 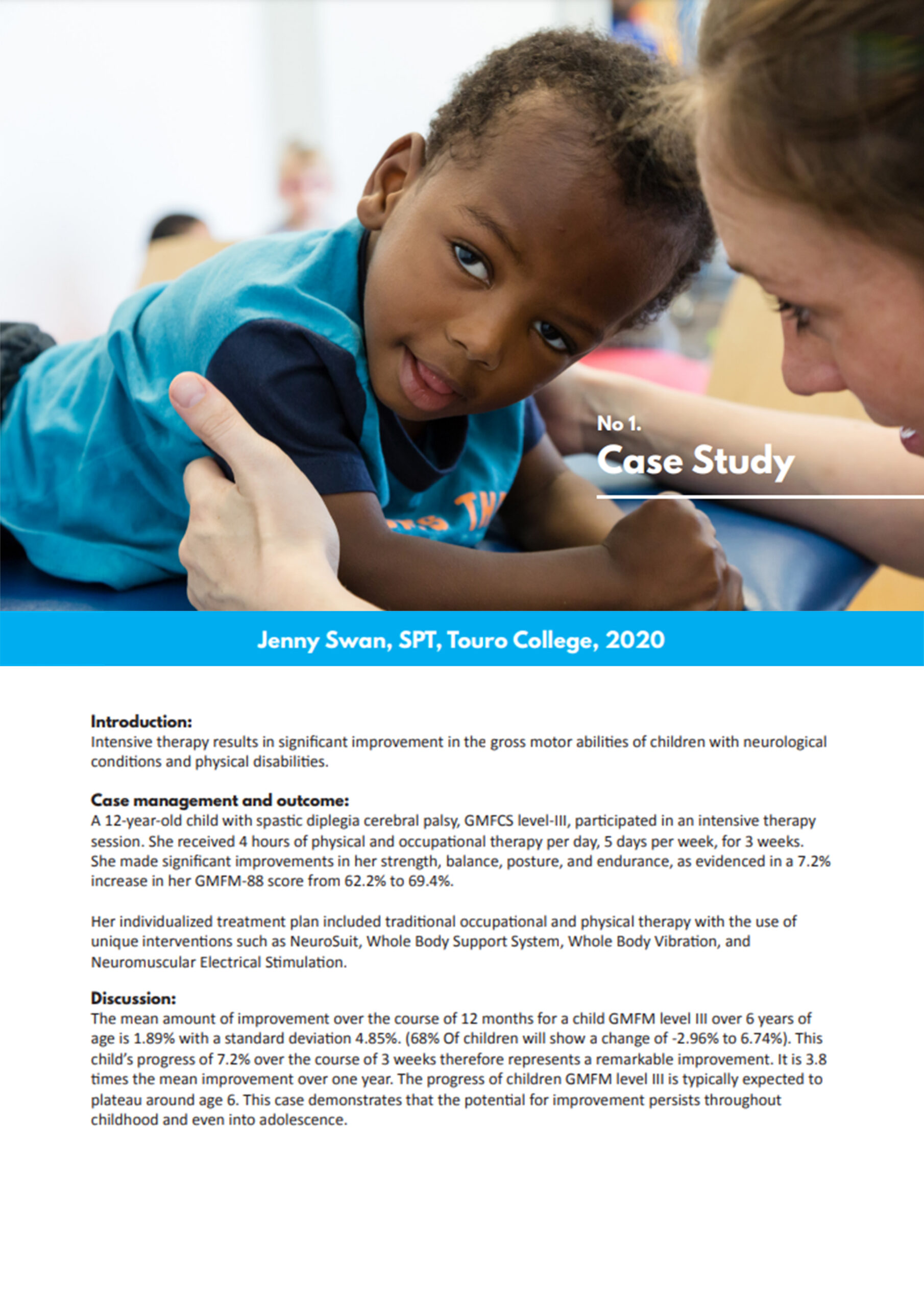